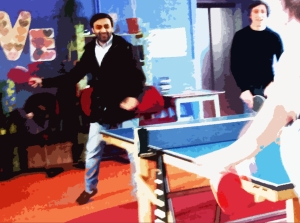 The boys were back at club today. Jon, Richard, Michael and Robert had a farewell few games of table tennis with Vimal before he jetted off to faraway lands.

They may have been hitting their thirties but the clock went back as soon as they gathered round the table tennis table.

We had laughter, arguments and tantrums in even measure.

There was talk of everything and everyone from the Mars bars incident to the time-capsule to Dean.

It was a short visit but brought back years of memories.

And Roz got to the last three playing ’round-the-table’…not bad considering one of her arms is broken and she shouldn’t have played…Shhhhhh.